Meet the newest member of the Rude family, Toodles. 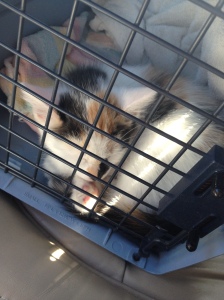 Toodles on her way home from the Adel Vet Clinic.

Toodles has been with us for almost two weeks now and she is making herself right at home! Both the kids enjoy her, probably a little too much. It will be a great opportunity to teach them how to be gentle. I also look forward to teaching Max how to feed, water, and clean out her litter box. It will be nice to teach him some responsibility (and also not have to do those chores… 😉

Max and his new pal.

She has been such a good kitty but my only complaint would be that she can be a little too friendly. When the kids go to bed, Toodles likes to snuggle up to me or Jason. She really has sought out Jason on many occasions and purrs while circling around his neck and licking his face. I guess she knows who she needs to impress. 😉

She has been found more than once in G’s crib. Mixed reactions from G have led me to keep Toodles behind closed doors during nap and sleeping times.

It is nice to have another four legged friend around the house.

If you are wondering about the name, you have not seen Mickey Mouse Club House as much as Max and I have. “Oh Toodles” is very fun to say! 😉

Off to the dance! 💕
I got to love on my sweet kids today. So thankful for them! 💕💕
My girlies on Valentines Day! 💕❤️💕❤️

Cooking with a Wallflower
My Blog
j & s johnson
The Meyers
the griess memoirs
Two of a Kind, Workin on a Full House
Baby Schafbuch
Life in the Fast Laehn
crummary
The Wee Rudes
The Nicklaus Family
It's Like They Know Us
for all women everywhere
http://blog.mrprintables.com
Totally Tots
Table for Two
Des Moines Moms Blog
Momastery
Busy Mommy
ANGIECAT
%d bloggers like this: