On Saturday, June 21st, Max had the opportunity to be a ring bearer for the second time at our friends’ wedding. Jonathan and Emily were so sweet to Max and got him a “state ball” or for those of you who don’t speak Max, an Iowa State basketball. He loves it and has been sleeping with it since the rehearsal dinner on Friday. What a great way to say thank you to Max!

All dressed up and ready to go!

Being the mother of the ring bearer is quite the job! Ha! It was busy but I really enjoyed it and was so excited that Max (and Jason as a groomsman) could be part of their special day! We ordered Max’s suit awhile back and it turned out to be a pretty good deal! We had to get the pants tailored a bit to fit him, but he looked pretty darn handsome if you ask me!

Busy with the trains!

He was such a stud at the rehearsal. He walked down the aisle like a champ. On Saturday, he did a wonderful job at pictures and kept busy playing with trains until it was show time. He was so sweet when it came time to go down the aisle. I helped him get started and then my friend Jill directed him where to go while I snuck up to the front of the aisle. At first he couldn’t see me and Jason motioned with his eyes (while on stage!) to move closer to the aisle. When Max saw me he sprinted down the aisle and almost tackled me down with a big hug! As promised, we went back to the room with the trains and all was well! 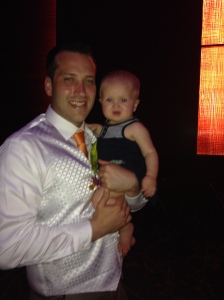 Jason and Gwenyth during the daddy/daughter dance!

Off to the dance! 💕
I got to love on my sweet kids today. So thankful for them! 💕💕
My girlies on Valentines Day! 💕❤️💕❤️

Cooking with a Wallflower
My Blog
j & s johnson
The Meyers
the griess memoirs
Two of a Kind, Workin on a Full House
Baby Schafbuch
Life in the Fast Laehn
crummary
The Wee Rudes
The Nicklaus Family
It's Like They Know Us
for all women everywhere
http://blog.mrprintables.com
Totally Tots
Table for Two
Des Moines Moms Blog
Momastery
Busy Mommy
ANGIECAT
%d bloggers like this: