Gwenyth has been so busy growing up! At 10 1/2 months, she has her two top and two bottom teeth. They decided to all come in at once, so it was rough for awhile, but she is good now! 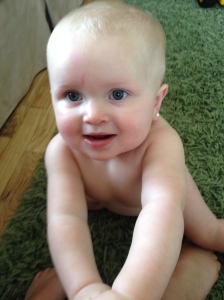 Gwenyth trying to pull herself up on the couch.

Also, Gwenyth learned how to crawl. It was last Tuesday and watching her now, you would think she has been doing this for years! She moves so well and so confidently. She is already starting to pull herself up on things as well, well at least trying to.

Another first was for her to get her nails painted! We attended a friend’s wedding on Saturday and I thought this would be a perfect time to paint her chubby little toes. My friend Liz suggested to put her in an exersaucer so she would be contained. I thought this was a fabulous idea, but we only have a jumparoo. I thought this would work out the same but did not take into account that G loves to jump! She was happily jumping the whole time, so her toes are slightly less than perfect. 😉 There is always next time!

Cooking with a Wallflower
My Blog
j & s johnson
The Meyers
the griess memoirs
Two of a Kind, Workin on a Full House
Baby Schafbuch
Life in the Fast Laehn
crummary
The Wee Rudes
The Nicklaus Family
It's Like They Know Us
for all women everywhere
http://blog.mrprintables.com
Totally Tots
Table for Two
Des Moines Moms Blog
No Title – Momastery
Busy Mommy
ANGIECAT
Loading Comments...