<!– /* Font Definitions */ @font-face {font-family:"ＭＳ 明朝"; mso-font-charset:78; mso-generic-font-family:auto; mso-font-pitch:variable; mso-font-signature:1 134676480 16 0 131072 0;} @font-face {font-family:"ＭＳ 明朝"; mso-font-charset:78; mso-generic-font-family:auto; mso-font-pitch:variable; mso-font-signature:1 134676480 16 0 131072 0;} @font-face {font-family:Cambria; panose-1:2 4 5 3 5 4 6 3 2 4; mso-font-charset:0; mso-generic-font-family:auto; mso-font-pitch:variable; mso-font-signature:-536870145 1073743103 0 0 415 0;} /* Style Definitions */ p.MsoNormal, li.MsoNormal, div.MsoNormal {mso-style-unhide:no; mso-style-qformat:yes; mso-style-parent:""; margin:0in; margin-bottom:.0001pt; mso-pagination:widow-orphan; font-size:12.0pt; font-family:Cambria; mso-ascii-font-family:Cambria; mso-ascii-theme-font:minor-latin; mso-fareast-font-family:"ＭＳ 明朝"; mso-fareast-theme-font:minor-fareast; mso-hansi-font-family:Cambria; mso-hansi-theme-font:minor-latin; mso-bidi-font-family:"Times New Roman"; mso-bidi-theme-font:minor-bidi;} .MsoChpDefault {mso-style-type:export-only; mso-default-props:yes; font-family:Cambria; mso-ascii-font-family:Cambria; mso-ascii-theme-font:minor-latin; mso-fareast-font-family:"ＭＳ 明朝"; mso-fareast-theme-font:minor-fareast; mso-hansi-font-family:Cambria; mso-hansi-theme-font:minor-latin; mso-bidi-font-family:"Times New Roman"; mso-bidi-theme-font:minor-bidi;} @page WordSection1 {size:8.5in 11.0in; margin:1.0in 1.25in 1.0in 1.25in; mso-header-margin:.5in; mso-footer-margin:.5in; mso-paper-source:0;} div.WordSection1 {page:WordSection1;}
One month away from being one year old!  Where has the time gone???  As I sit down to think of the highlights and milestones over the past month, I realize that Max is a totally different kid than he was a month ago.  He has accomplished so many new things; it is so amazing to see!
Where to begin?  Max is crawling around like a mad man.  He is so fast!  Sometimes when I leave the room, he follows me laughing and crawling as fast as he can to see what I am up to.  Other times, he follows me a little more slowly, with his head down, crying.  This is usually when he is tired and it breaks my heart the way he wants to be with me, but is also kind of funny. 😉
He is also pulling himself up on everything; the couch, tables, beds, cupboards, toys, even mom and dad!  At first, he didn’t quite know how to get down, but now he has mastered that as well!
The tub has been one of Max’s favorite places to hang out.  He thinks it is so cool to be in the big tub with all his toys.  Max isn’t crazy about the bubbles, especially when I try giving him a bubble beard, but I think he will grow to like them.
Max still has just the two teeth.  We are taking good care of them and brushing them, which Max loves!  He wants to hold the toothbrush on his own, but that could get a little crazy, so I tell him that mommy is going to do it for now.
Food, food, food.  Max still loves to eat.  His Grandma Kay spoils him with Gerber meals when he is at her house and on those days I think he eats better than me!  He has tried a couple kids’ meals at restaurants as well.  We discovered that there are a couple things he doesn’t really like and on the top of that list is broccoli.
Max is really excited about his new friend that is going to arrive in early February.  Our good friends John Michael and Rachael found out their little one is a girl!  Max is going to show her the ropes on how to be awesome and introduce her to all of his other friends!  😉  I am so thankful for friends with babies or that are getting ready to have babies; it makes this whole mom thing just that much better!
Here are some photos from this past month! 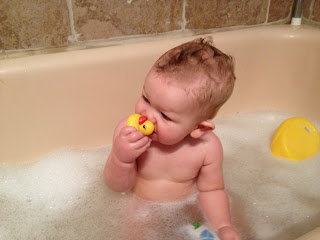 Stitched Together
Cooking with a Wallflower
My Blog
j & s johnson
The Meyers
the griess memoirs
Two of a Kind, Workin on a Full House
Baby Schafbuch
Life in the Fast Laehn
crummary
The Wee Rudes
The Nicklaus Family
It's Like They Know Us
for all women everywhere
http://blog.mrprintables.com
Totally Tots
Table for Two
Des Moines Moms Blog
No Title – Momastery
Busy Mommy
%d bloggers like this: